Put a stop to human and sex trafficking 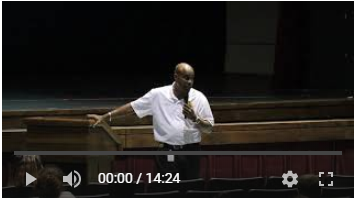 Nonprofit organization, “I Am Who I Am Inc.” hosted a 30 minute assembly to advocate for human/sex trafficking at Inlet Grove, on Friday, Jan.10th.

During the assembly, vice president, Dr. Aldric Marshall, spoke about things such as: what victims are particularly targeted, what they look like, what areas and parts of the world this typically happens in, his personal experiences with victims, and showed videos of former victims sharing their experiences.

“Not too long ago, they (police officers) busted a house in north Palm Beach and they found six girls [as a result] for human trafficking. That’s just a stone throw away from you guys.”

“Now one of these statistics are going to say 14 years old, but we’ve had as young as nine years old.”

“So, here it is. Elements of trafficking: On the basis of the definition given in the Trafficking in Persons Protocol, it is evident that trafficking in persons has three basic elements the act, means, purpose.”

The assembly ended with the company’s personal card being handed out and contact information being given.

Following the assembly, I Am Who I Am Inc.’s president, Terra Kennedy, added a few thoughts, “The company does things such as annual workshops, held on July 10th and July 24th. One is for young men and one is for young men. After both are completed, a coronation banquet is held, where both parties are crowned. There will be an event for adults held on Jan. 18th, which will educate them on human/sex trafficking as well.”

The President states that, “Inlet Grove was the first school that accepted us. However, the state passed the law that it’s mandatory to have the sex trafficking awareness.”

Furthermore, the reason why this information may be deemed ‘critical’ to know is because out of the U.S, as previously stated, “Florida is ranked #3 [in terms]of sex trafficking and [out of the state of Florida], Broward county is ranked #1. Also, super bowl is next month and human trafficking may definitely be an issue,” continued the president.