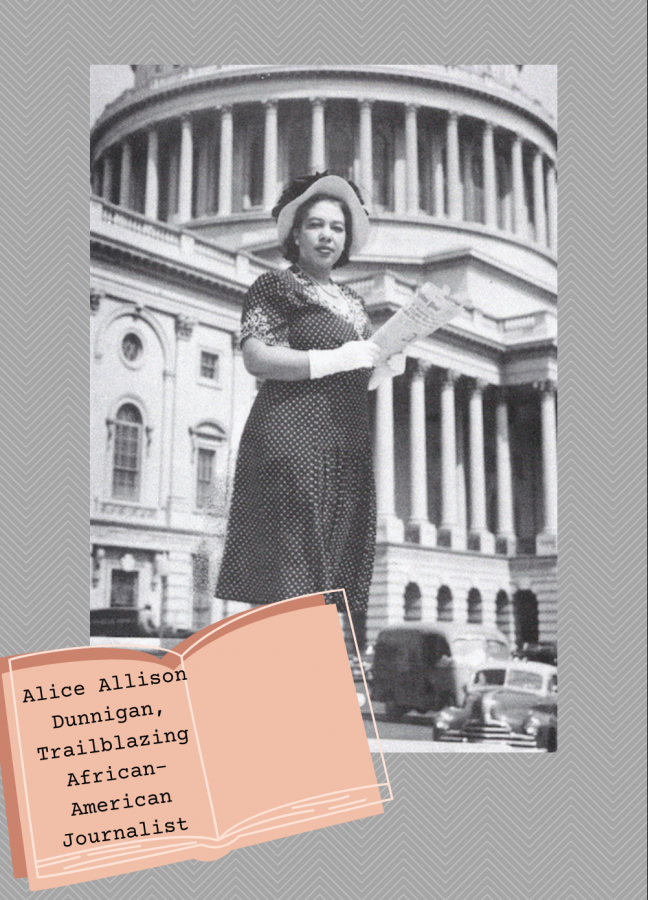 Alice A. Dunnigan. She juggled a freelance writer position for the Chicago, Illinois branch of the American Negro Press (ANP) and night courses at Howard University in statistics and economics.

the activity or profession of writing for newspapers, magazines, or news websites or preparing news to be broadcast.

A person who writes for newspapers, magazines, or news websites or prepares news to be broadcast.

For Scholastic Journalism Week (SJW), which this year is 2021, today we remember the memory of the first black female journalist.

Alice Dunnigan (April 27, 1906 –May 6, 1983) was a pioneering journalist, who fought the racism and sexism of her era to become the first black woman to cover the White House, Congress, and Supreme Court. Alice was born in a time when options for black women were limited, but Alice had a dream of being a reporter. She became a reporter in 1946 for the Associated Negro Press, often times she was the only woman among the White House Press corps. August 1947, the occasion was a regular weekly news conference, while it was nothing new to many reporters it was a thrill of a life time for Alice, some wanted to know what she was doing there and she was happy to boast about being accredited to the White House press corps. They imply it was no big thing, though they congratulate her, it represented progress for her race recognition of the Black Press consideration of women reporters and a very personal honor for her, because she was the first black woman ever to receive such accreditation. She was fill with pride and exultation as she whispered to herself, “think what you may, but you must admit that it is indeed a long way from that red clay hill in rural Logan County Kentucky to the hallowed halls of this imposing structure, the capitol of the nation in Washington D.C. Alice persevered through sexism and racism to achieve success and respect as a journalist.