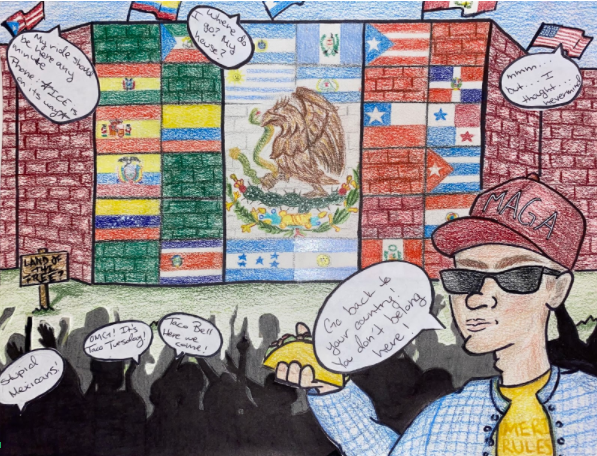 In our world today, people have always been so quick to judge another person solely based on where they come from. I never understood this because we are always taught in schools that America is the “home of the free,” but are we? There are so many people nowadays that are treated differently than others because they are either Black or Hispanic or Asian (or look anything other than white) and told that they don’t belong here. As a Puerto Rican girl that has lived in America my whole life, this is extremely frustrating to me. Especially when someone tells a Hispanic to go back to where they came from when they have no clue what that person’s background is. This is why for my Satire Project I chose to express the numerous stereotypes that are put on Latinos/ Latinas living in America.

This problem affects many people in today’s society because there are so many Hispanics/ Latino(a)s coming to America in hopes of finding a better life for their families. The problem with this is that they come here to just be treated as less than or even nothing because they look a certain way or can’t speak English. These people have and still do so much for America and what they get in return is either someone telling them to go back to where they came from or worse: murdered. Recently, my mom and I were driving home from her job and we were at a red light waiting until we were able to turn right safely and not hit anyone. The car behind us began to beep the horn at us even though the light was clearly red and there was a load of cars flying down the road. When we turned, he then flicked my mom off and attempted to cut us off.

When we got to the next red light and were side by side with each other, the man and my mom exchanged some words and he proceeded to tell my mom that she needed to learn how to drive and go back to where she came from. This completely caught me off guard because I had never experienced someone telling neither me nor my mom to go back to where we came from. These types of things upset me because I feel like America wants to be portrayed as this country where everyone is equal and everyone can live amongst each other with no problems; however, here we are. Still experiencing racism and no equality whatsoever. Also, there is the stereotype that all Hispanics are from Mexico, which actually upsets a lot of other Hispanics because I have noticed that a lot of Spanish speaking people are very prideful in where they come from, and it actually upsets us when someone just assumes that we are from a certain place because in other’s eyes we all look the same. I know for me personally, I am very proud to say that I am a Puerto Rican girl and I wear that as like a trophy. It makes me different and I just love my culture and my music and most importantly my island. So, when someone assumes that I am a Mexican, it may seem like something that I shouldn’t take personally, but I do. This hurts me because it feels as though my country is not recognized and I am just labeled as the stereotypical Hispanic: Mexican.

The reason I chose to do a drawing for this project is because I actually really love to draw and have been drawing for many years. I also used to look up political cartoons in middle school and thought that this project was a perfect opportunity for me to create my own kind of political cartoon for something that I felt passionate about. So, in my drawing I decided to base the concept around the stereotype I discussed in the previous paragraph (about all Hispanics being Mexican). In the drawing you can see a wall with what appears to be the Mexican flag but with a twist. I thought that it would be interesting to draw out the Mexican flag as a whole but with each Spanish-speaking country’s flag inside of it. This is a representation of the stereotype, since all Hispanics are apparently Mexican. Also in the drawing, the border or wall is supposed to be in America as symbolized by the small sign on the sign that says “LAND OF THE FREE?” I also wanted to include the other stereotype that all the people that say this are Trump supporters so the main man in the drawing has a MAGA hat and a shirt that says America Rules. The quotes on the side are kind of self explanatory to mean the other stereotypes and things that other ignorant people say in our society today. I think that my drawing satirizes the subject I chose to draw because of the stuff I included in it (ex. The quotes – like the ones talking about ICE and Taco Tuesday, and maybe even the add-ins of the different stereotypes from both sides of the field). My hope for this drawing is that maybe others can really consider how these little things actually affect a lot of people that are just working hard to make a decent life for themselves and their families, even if they were not born here in America.